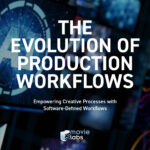 This paper is the third in the 2030 Vision series. The first paper laid out ten principles critical to a bold 2030 Vision for the future of media creation, calling upon the industry to collaborate to realize the benefits of that vision. The second double-clicked on the security concepts of the 2030 Vision and presented six new principles focused on a cloud-based, security-by-design architecture to replace the perimeter security approach of traditional media production.

The new paper published today double-clicks again on the software-defined workflow principles of the 2030 Vision. It discusses a path to implementation of those principles, describing the essential formalisms and specific mechanisms that will enable flexible production workflows with increased automation and interoperability.

The goal of software-defined workflows is to support human creative tasks by connecting them to the greatest extent possible through software-mediated collaboration and automation. The paper defines a framework that allows software to understand and communicate information about workflows, making them more nimble and adaptive. It presents an approach which can be applied immediately to help build interoperable tools for automation in a myriad of areas, such as collaboration, compute and rendering orchestration, asset movement, cost calculation, personnel scheduling, and project dashboards.

“The 2030 Vision initiative presents a roadmap for moving the industry into the future of media creation,” said Richard Berger, CEO MovieLabs. “A key next step in the initiative is to organize the industry around development of the components necessary to enable true automation and interoperable workflows. We have already formed a studio working group focused on this effort, and we look forward to collaborating with partners across the industry to make the 2030 Vision a reality.”